All right folks, I’m still on deadline, so I’m keeping this post short. And speaking of short…

Sunday marks the start of NaNoWriMo – or National Novel Writing Month. I’ve participated (and won) two years – both the MG Fantasy that’s on sub and the YA Contemporary I’m revising are products of NaNo. I really missed not doing it last year (thanks to that pesky concussion), but unfortunately I have so much on my plate right now, I’m going to have to miss out this year as well.

But the good news is I’ve found something to do in what little time I have available: PiBoIdMo (aka Picture Book Idea Month – seriously, you’d think a bunch of people who use words for a living could come up with better acronyms).

PiBoIdMo is the brainchild of Picture Book Writer Tara Lazar, and it’s pretty much self-explanatory. Come up with one picture book idea a day for the month of November. Ideas can include a character, a book title, a situation, any kernel that you might be able to turn into a picture book manuscript. Have questions? Check out the PiBoIdMo FAQs.

I doubt I’ll win, but any story ideas will be an advancement on where I am now. So, hopefully, I’ll have something to write about once I get some time again.

What about you? Are you doing any writing challenges in November? Have you done them before? Tell me about it in the comments.

#PiBoIdMo or #NaNoWriMo – Which writing challenge are you up for? @k_callard wants to know. http://wp.me/p4iSYz-cX (Click to Tweet) 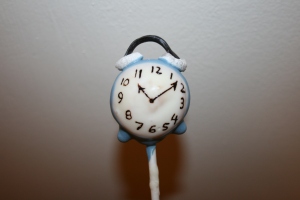 As those of you who follow this blog already know, the deadline for my OMG-I-can’t-believe-I-still-can’t-tell-you-yet-but-maybe-hopefully-I’ll-be-able-to-reveal-all-soon project is the end of next week.

Which means I’ve been going more than a little crazy over here.

The pressure is mounting, and little things like eating, showering, and social media have been falling to the wayside.

The good news is, I’m on track to hit my deadline. I’m just heading into my final rounds of revising, and, barring any technical difficulties, I should have it all wrapped up soon. (Yay!)

But until it’s done, I’ll be running around like the proverbial headless chicken – so if I disappear from here and/or Twitter for a few days, you’ll know where I am.

What’s the first thing to go when you’re under deadline? Let me know in the comments.

I am so excited to be a part of the cover reveal for my friend, Michelle Hauck.

Today Michelle Hauck and Rockstar Book Tours are revealing the cover for GRUDGING, Birth of Saints Book One series which releases November 17, 2015! Check out the gorgeous cover and enter to win a copy of the eBook!

On to the reveal!

A world of chivalry and witchcraft…and the invaders who would destroy everything.

The North has invaded, bringing a cruel religion and no mercy. The ciudades-estados who have stood in their way have been razed to nothing, and now the horde is before the gates of Colina Hermosa…demanding blood.

On a mission of desperation, a small group escapes the besieged city in search of the one thing that might stem the tide of Northerners: the witches of the southern swamps.

The Women of the Song.

But when tragedy strikes their negotiations, all that is left is a single untried knight and a witch who has never given voice to her power.  And time is running out.

A lyrical tale of honor and magic, Grudging is the opening salvo in the Book of Saints trilogy.

Michelle Hauck lives in the bustling metropolis of northern Indiana with her hubby and two teenagers. Two papillons help balance out the teenage drama. Besides working with special needs children by day, she writes all sorts of fantasy, giving her imagination free range. A bookworm, she passes up the darker vices in favor of chocolate and looks for any excuse to reward herself. Bio finished? Time for a sweet snack.

She is a co-host of the yearly contests Query Kombat and Nightmare on Query Street, and Sun versus Snow.

Her epic fantasy, Kindar’s Cure, is published by Divertir Publishing. Her short story, Frost and Fog, is published by The Elephant’s Bookshelf Press in their anthology, Summer’s Double Edge.

3 winners will receive an eBook of GRUDGING.

A big part of writing is trying to connect with your readers – be they agents and editors reading your query, or actual readers of your book. Ideally, you want to your work to have a universal appeal, and connect with as many readers as possible. The question is, how?

Some people think the key to connecting is being vague. That by using broad terms you can connect with more people.

Take, for instance, this sentence: “I totally humiliated myself in sixth grade.” That should have mass appeal, right? I mean, who didn’t embarrass themselves in sixth grade?

Except, there’s nothing there to connect with. There’s no emotion, no stakes, nothing.

Now compare it to this: “In sixth grade, we went on a field trip in my neighborhood, and I told the whole class I knew a shortcut to get to where we were going, only I got us all lost and made us miss our presentation*…”

I’m going to guess you just winced. That’s because you connected with it. I’m pretty sure you didn’t get your class lost on a field trip, but you could connect with my embarrassment, and relate it to your own experience.

Now, part of this is showing versus telling, but part of it is giving the reader a specific event to connect with. In order to be universal, you have to be specific.

What about you? Are you guilty of vague of statements, or are you good at getting specific? Let me know in the comments.

P.S. Come back after midnight to check out the cover reveal for Michelle Hauck’s new book, GRUDGING, Birth of Saints Book One.

I knew when I started working from home as an almost-full-time writer that there would be difficulties. In fact, I outlined a number of them here. But the one thing I hadn’t thought much about was illness.

In fact, probably if you’d asked me, I would have said that one of the best things about working from home is that you don’t have to completely miss work when you’re sick. I mean, with a laptop you can type from anywhere – including your bed.

But thanks to the nasty cold I caught this week, I’ve come to realize this is also one of the worst things about working from home.

If I was working at a office, I’d call in sick, sleep around the clock, and hopefully be back at work after a day or two.

But, working from home, I can never escape the call of the computer. That niggling feeling, while I’m sacked out on the couch, that really, writing wouldn’t take that much more energy, so I should just get off my butt and get to work – even though I barely have the energy to make myself a cup of tea.

And when I do try and rest, I just end up wasting valuable energy stressing, and beating myself up over not working every minute of the day.

What makes it worse is that I do have a deadline hanging over me, getting closer by the day (as deadlines tend to do). That’s right, my still-a-secret-and-it’s-killing-me-not-being-able-to-share-it-with-you-guys-but-I-should-be-able-to-tell-you-soon project is due in less than a month.

But I’ve come to realize forcing myself to use up what little energy I have on work is just prolonging the recovery process. Instead of trying to find a work-health balance, I need to recognize my limitations, because right now I’m wasting more time working half-heartedly than if I just took the day off and came back full strength the next day. I need to walk away from the computer, spend a day sleeping, and get well ASAP, so I can put my all into my project. And if I have to work a bit harder over the next few weeks to make up for the time off, at least I’ll have the energy for it.

What about you? How do you deal with deadlines and sickness? Let me know in the comments.

And now, if you’ll excuse me, my couch and teapot are calling me.

Last week was a bad week for me. Work on my still-top-secret-but-I-promise-I-should-be-able-to-tell-you-soon project wasn’t going well. I was stressed, having trouble writing, and I actually had a few moments where I wondered if I should even be doing this at all. I felt like a fraud for calling myself a writer.

I had to take a step back from my work.

In fact, I ended up going back and re-reading a bunch of stuff I had been working on. It was the best thing I could have done.

Because it reminded me how much I love what I do. And how excited I am about the projects I’m working on. And that I really do have talent, despite what the monster of self-doubt keeps whispering in my ear.

So I decided to take action against my fears. I opened a folder on my computer and called it “You Can Do This.” Then I started copying things into the folder: an email from Bri raving about my work, a couple of positive rejections (just the good parts), and some killer lines I’ve written – even if they ended up cut in revision.

Now, every time I start to feel like I’m a fraud, I have somewhere to go for reinforcements. I can see all these good things and remember why I started doing this in the first place, and know that one set-back or bad day doesn’t mean I’m not capable.

Since then, I’ve checked in with a few writer-friends who are all at the same point in their careers as I am, and it turns out, many of them were feeling the same way. In fact, one of them coined a great phrase for it**. She called it Imposter Syndrome.

Somehow knowing others are going through this too made me feel better. And now that I’ve armed myself against the feeling, maybe I’ll be able to fight my way out of it faster next time it happens.

What about you? Have you ever felt like a writing fraud? Tell me about it in the comments.

**Note: Well, I thought my friend coined the term. Actually it’s a term used by psychologists, and it’s way more common than I knew. You can check out its wiki page here.